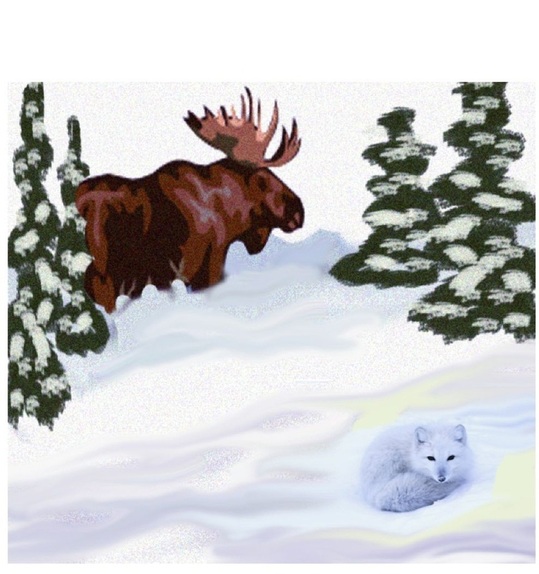 Painting by Susan Goyen
Sebastian, The Lost Moose, and Icicle, the Arctic Fox, and Twelfth Night.

Several nights had past since Sebastian, and Icicle, had seen the trolls, and the ghostly bear, and his equally ghostly, handler. Granted there was edginess to the forest, particularly at night, and the friends weren’t overly inclined to go near the human town.

Icicle had been a little surprised when Sebastian admitted that this Christmas thing was getting just too odd, and he wasn’t quite sure if he wanted to find flying reindeer. But the fox had no complaints at staying away, and for the most part they remained in their known woods

And that was where their problem began – at least for Sebastian – there was little food left for him, and now he would have to forage further afield.  Nor did Icicle mind, since hunting had become slimmer than she would like.

“We just won’t go near the humans’ town,” Sebastian said, as he ambled north. “We can go around the back part of the fences, and into fresh woods.”

“Maybe by now all the strangeness will be over,” the Arctic Fox said, though she knew things still felt “weird.”

A “weirdness” that seemed to grow with the lengthening of the night.

Sebastian gave a polite snort, and said, “Well, whether it does or not I’m hungry.”

The wind was blowing with a biting harshness, even with the protection of the trees, as they set out to find food. The bitter chill seemed to wend its way through the trees, and even through their coats. Soon, though, both friends’ attention was caught by a sound that struck terror into their bones; an instinctual knowledge more than from experience. For on the sharp wind came the sound of baying!

“Wolves,” Icicle whimpered softly. She knew she could hide or flee, but she also knew Sebastian would be fair game for a hungry pack.

“Move over to that log,” the fox told him, “And let me up on your back! Between your hoofs, and my teeth, we might stand a chance.”

Sebastian, though young, knew there was little chance. The snow was deep, and slowed him, and an elder moose cow had once told him a story of hungry winter wolves. He knew that they were persistent when starving.

But he obeyed Icicle, and let her leap onto his back, and then he set off as fast as he could.

The baying grew louder, and nearer, and from the dark shadows of the woods burst forth huge – ebony – hounds; they flashed by, pulling a sleigh, whose driver was cloaked in white.

Sebastian froze in place, though he could feel Icicle’s claws digging into his back. Though whether for purchase, or out of fear, he could not say.

Then a new sound caught his ears.

Well back along the path the hounds and sled had come from was the tiny, mournful, sound of a child crying.

The young moose thought it sounded human, but in that cry was such loneliness that the cry drew him down the dark path.

And there, glowing with the same ghostly light of the polar bear, was a young child, though neither of the friends would call the babe “human.”

Tiny, and pale, with long white hair, the little one looked up the pair, and held out its thin arms. Its eyes were sad, and filled with glistening tears.

Sebastian knew that he couldn’t leave this little one all by itself – no matter how strange, or possibly human, it was. So, just as he had done for Icicle, he angled near a fallen log – letting the little spirit scramble up onto his back.

Icicle moved behind the little spirit as it wiggled into place on Sebastian’s neck, and then pressed her body against its chill one to help stabilize it.

Far ahead they could hear the hoarse baying of the great hounds – with the sound getting further and further away. And Sebastian set off at a trot – trying to go as fast he could over the snow, but careful enough that his passengers didn’t fall off.

Then – to the moose’s shock – he realized that his hoofs were no longer wading through snow, and the woods were flying by.

On the wind he heard the spirit child laughing with glee, and Icicle’s long howl. Though he couldn’t say if her howl was from excitement or terror.

Then they were at the sleigh, and the little one lept down, and ran to a gleaming, white-clad, woman. The woman’s hair and clothes were as white as Icicle’s coat, and blended with the swirling snow.

The woman scooped the child up onto the sled, and then took up the reins, but not before she had smiled back at the friends. Her voice was whisper soft, but carried on the wind, “Thank you.”

Then the black hounds and the woman were gone, blending into the night and the blowing snow.

“I flew,” was all Sebastian could think to say.

“Yes, you did,” Icicle agreed, though with a tremor to her tone, “Maybe I should wish you, ‘Happy Twelfth Night.’"